On International Women’s Day, March 8th, 2022, Shared Action Africa, celebrates the young women and men at the forefront of advocating for increased access SRHR services that are tailored to the unique needs of adolescents and young women. The ongoing campaign is supported under our advocacy initiative known as Arise for Reproductive Justice for Refugee Girls in Nakivale and Oruchinga refugee settlements and host communities in southwestern Uganda.  The advocacy efforts are aimed at influencing the creation of youth-friendly corners at the health facilities where adolescents and young people can access SRHR services without fear of reprisal by their communities. Access to youth-friendly SRHR services among others is aimed at preventing the occurrences of early and teenage pregnancies among young people like 17-year-old Berita Byukusenge. 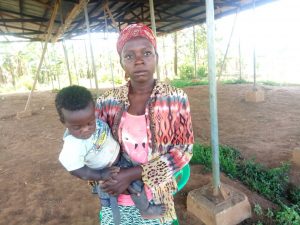 Beritah, like many young girls, became pregnant during the prolonged school lockdown of over 14 months to curb the spread of the COVID-19 disease. Due to lack of access to information about reproductive health, peer pressure, and the need to access basic needs such as food, clothes that could not be provided by her immigrant parents from Rwanda, she fell under the influence of a married man. She got pregnant and her relationship with the married man deteriorated and was characterized by emotional and physical abuse, Simultaneously, Benita was expelled from her home by her parents and sought refuge with an older woman in another village. In exchange for a roof over her head, Benita is working in the old woman’s banana plantation. Benita’s experience could have been different if she had had access to a safe place or environment where the youth can access information on sexual and reproductive health.

“I became pregnant because I lacked knowledge on sexual and reproductive health care. If only I had access to someone I trusted to talk to as well as a safe place where I could access information without shame and fear of ostracization from my community. My situation would have been different because as a teenage mother, I not only have to take care of myself, I also have to provide a home to my nine-month-old baby. To earn a living, I work in the banana plantation of an elderly woman in our village. If only I had information on contraceptive use, I would not be a statistic of early and unwanted pregnancy. One uninformed decision has forever changed my life.” 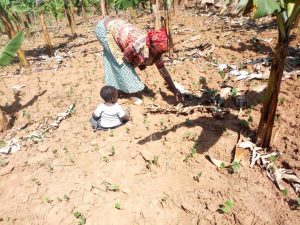 Beritah with her baby in the banana plantation where she works to earn a living.

To reduce, the high incidences of teenage/adolescent pregnancies among refugee adolescents, which is at 8.7% according to Makerere College of Health Sciences, Kampala, Shared Action Africa is working towards a shift in practice, behavior change, and policy implementation towards increasing access and utilization of SRH services for girls like Beritah.  To this end, a Youth Collective for SRHR was created to partner with others and advocate with others for youth-friendly spaces for SRHR to be established at all health facilities in Nakivale Refugee Settlements. Similarly, the project identified and trained Peer Educators whose role is to mobilize and educate their peers to foster positive behavior change geared towards increased utilization of sexual and reproductive health services that are tailored for adolescents and young people. Young people such as Benita and others like her, are not only willing to share their stories but also serve as change agents within their communities to influence behavior among their peers to utilized youth-specialized SRHR services. And it is for this reason that we celebrate them this International Women’s Day.